Saint Rita of Cascia: Saint of the Impossible 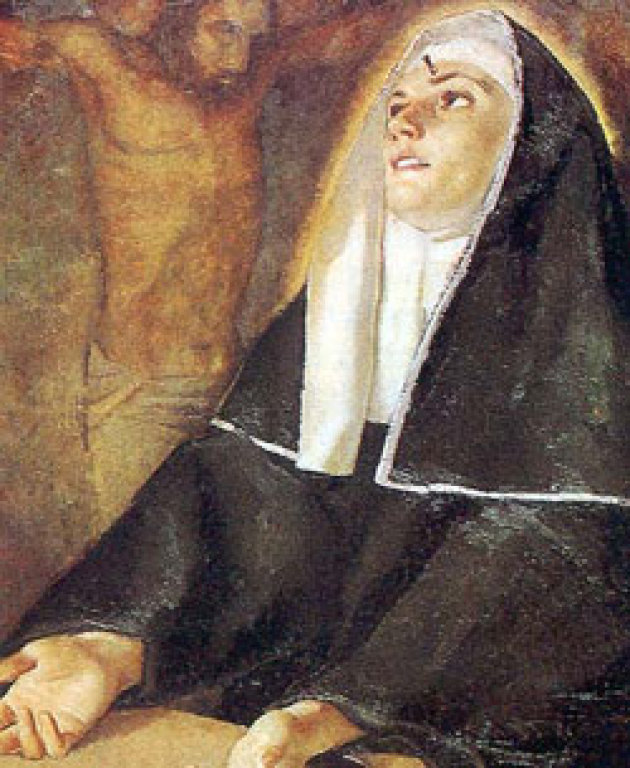 Rita was born in the year 1381 in the village of Roccaporena, near Cascia, Italy. Her parents, Antonio and Amata Lotti, considered her birth a very special gift from God, for Rita was born to them as they were already advancing in age. As a young girl Rita frequently visited the convent of the Augustinian Nuns in Cascia and dreamed of one day joining their community. Her parents, however, had promised her in marriage, according to the custom of the day, to Paolo Mancini, a good man of strong and impetuous character. Rita accepted her parents’ decision and resolved to see this as God’s will for her.

Married Life
The young couple was joined in marriage and soon twin boys were born to them. Rita found herself occupied with the typical concerns of a wife, mother, and homemaker of Roccaporena, while Paolo was employed as a watchman for the town. In Cascia, as elsewhere, a great rivalry existed between two popular political factions, the Guelphs, and the Ghibellines. As a minor official of the town, Paolo often found himself drawn into the conflict, and the strain that this caused probably accounts for the tension, which he sometimes brought into the Mancini household. Through her prayer, patience, and affection, however, Rita was able to ease the stress and worry her husband experienced, but she was not able to shield him altogether from the dangers to which society exposed him.

Death of Husband and Sons
One day as Paolo was returning home from work he was ambushed and killed. The pain that this unexpected and violent death inflicted upon Rita was only compounded by the fear she felt that her two teenage sons, moved by the unwritten law of the “vendetta,” would seek to avenge their father’s death. Rita’s only recourse was to prayer and persuasion. As it happened, the death of both boys from natural causes a short time later removed them from physical and spiritual danger. Despite her great burden, she could still thank God that they had died in peace, free of the poison of murder to which hatred and revenge might have otherwise drawn them.

Peacemaker
Now alone in the world and without family responsibilities, Rita once more turned her thoughts to the desired vocation of her youth, that of joining the Augustinian Nuns of Saint Mary Magdalene Monastery. Some of the religious of the community, however, were relatives of the members of the political faction considered responsible for Paolo’s death, and so as not to tempt the harmony of the convent, Rita’s request for admission was denied. Fortunately, she was not to be easily dissuaded from following what she knew to be God’s plan for her. She implored her three patron saints — John the Baptist, Augustine, and Nicholas of Tolentino to assist her, and she set about the task of establishing peace between the hostile parties of Cascia with such success that her entry into the monastery was assured.

The Gift of the Thorn
At the age of thirty-six, Rita pledged to follow the ancient Rule of Saint Augustine. For the next forty years, she gave herself wholeheartedly to prayer and works of charity, striving especially to preserve peace and harmony among the citizens of Cascia. With pure love, she wanted more and more to be intimately joined to the redemptive suffering of Jesus, and this desire of hers was satisfied in an extraordinary way. One day when she was about sixty years of age, she was meditating before an image of Christ crucified, as she was long accustomed to doing. Suddenly a small wound appeared on her forehead, as though a thorn from the crown that encircled Christ’s head had loosed itself and penetrated her own flesh. For the next fifteen years, she bore this external sign of stigmatization and union with the Lord. In spite of the pain she constantly experienced, she offered herself courageously for the physical and spiritual well-being of others. During the last four years of her life, Rita was confined to bed and was able to eat so little that she was practically sustained on the Eucharist alone. She was, nevertheless, an inspiration to her sisters in religion and to all who came to visit her, by her patience and joyful disposition despite her great suffering.

The Rose
One of those who visited her some few months before her death — a relative from her hometown of Roccaporena — was privileged to witness firsthand the extraordinary things wrought by Rita’s requests. When asked whether she had any special desires, Rita asked only that a rose from the garden of her parents’ home be brought to her. It was a small favor to ask, but quite an impossible one to grant in the month of January! Nevertheless, on returning home the woman discovered, to her amazement, a single brightly-colored blossom on the bush where the nun said it would be. Picking it, she returned immediately to the monastery and presented it to Rita who gave thanks to God for this sign of love. Thus, the saint of the thorn became the saint of the rose, and she, whose impossible requests were granted her, became the advocate of all those whose own requests seem impossible as well. As she breathed her last, Rita’s final words to the sisters who gathered around her were, “Remain in the holy love of Jesus. Remain in obedience to the Holy Roman Church. Remain in peace and fraternal charity.”

Death
Having faithfully and lovingly responded to God’s many invitations to her in the course of her seventy-six years, Rita returned to God in peace on May 22, 1457. Her body, which has remained incorrupt over the centuries, is venerated today in the shrine of Cascia, which bears her name.

Her feast is observed on the anniversary of her death, 22 May.

You can learn more about St. Rita by reading this book, available online: Saint Rita of Cascia: Saint of the Impossible.